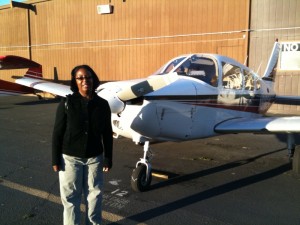 Avid followers of Jarard.com – The Pilot (yeah right, like there are any) may remember that I’d tried to take my aunt up for her first flight with me back in July, but that was the start of many cancelled flights during my summer. Those unfortunate events are well-documented in my post titled, “A Cruel Summer.” However, after taking a day off on August 28th and finally getting a chance to “…Get Back in the Cockpit“, I felt confident that I could schedule a flight with my aunt.

When I first obtained my pilot’s license, my aunt (and my mother) both told me something to the effect of, “hey, I love you but I ain’t flying with you.” I didn’t take it personal, I knew their fears were much larger than me. But my aunt loves to watch old black and white movies on the weekends, and recently she had watched “Spirit of St. Louis” – which is a movie about Charles Lindburgh’s famous flight from New York to Paris. So after that, she said…”why not, let’s do it.”

So I had her meet me at the airport on a Sunday after church for a quick hop around the area. The winds were pretty strong that day (330 at 18kts), so I first wanted to do a quick takeoff and landing at the airport to make sure she was comfortable with the aircraft and the winds. Fortunately, given the geography of the Bay Area, strong winds aren’t usually problem since they are nearly always shooting straight down the runway. So after the first landing, she was enjoying herself and even said, “wow, that was cool..nice and smooth.” Yay!

Then I figured, let’s take a quick hop over to the Stanford area and enjoy an aerial tour. So we did and she enjoyed seeing her ‘hood from 2000ft. On the way back to the airport, the winds strengthened…still at 330 but now it was 18kts gusting to 25kts. Now,I’d have to test my skills a bit. The runway is 310, so a wind at 330 is generally no problem, except when it starts to pick up speed and also have a significant gust. So on the approach, I had to let her know that although it feels like we’re only going 40kts (really slow), it’s actually ok. But she could really tell the difference in speed from the first landings…lots of power but slow speed. The second landing wasn’t quite as smooth as the first, but she didn’t scream and nor did she panic…she felt comfortable and applauded my skills. And in the end, I had another happy passenger.