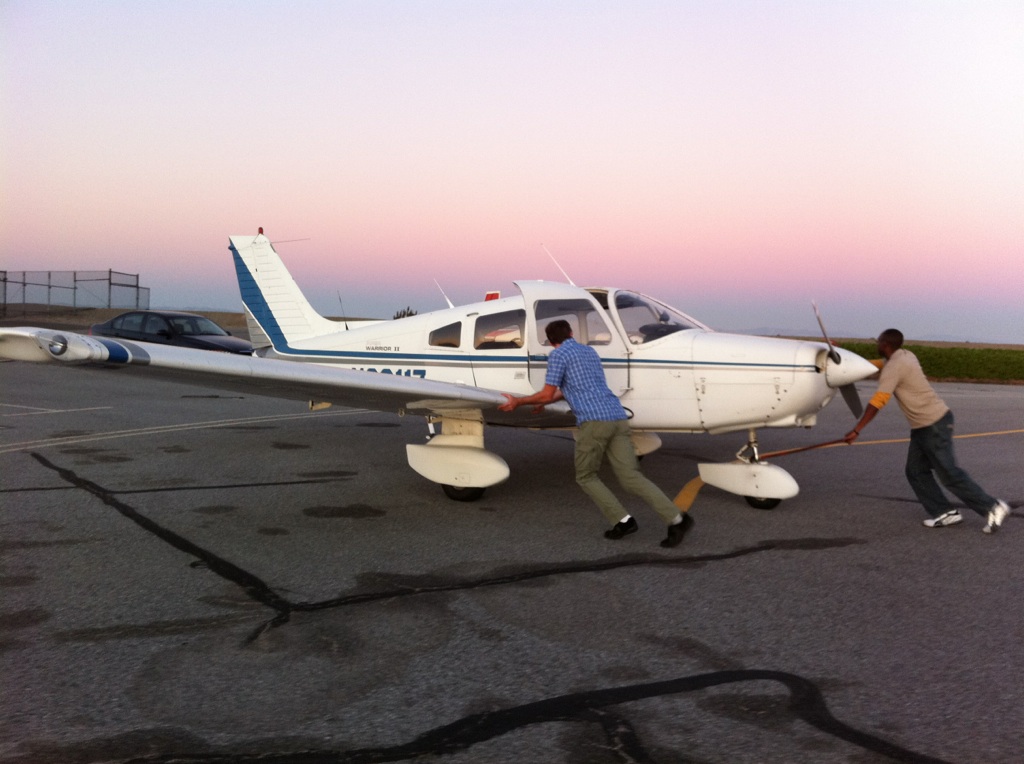 Two days after I returned from an amazing two weeks of trips abroad, I had the opportunity to fly my friend Laura and her friend, Rob, on a nice romantic Bay Tour flight. I’d flown Laura and her twins a year ago on a flight up to Santa Rosa on the same weekend as International Learn to Fly Day 2010. Laura enjoyed the experience so much that she talked to me weeks before this recent trip to try and schedule a nice romantic, sunset tour with Rob who was visiting from Portland. The flight couldn’t have gone any better. Laura and Rob arrived to the airport right on time and we took off without any delays – oh the joys of being a private pilot. The best part about the flight (outside of the late summer evening views of the bay, SF, and the orange-purple hue sunset) was my conversation with Rob. He’d never flown in a small aircraft but was very excited to learn about how it flies, all the systems, and my journey to become a pilot. Though I’ve done more than a dozen or so Bay Tour flights, it never gets old when I’m sharing the joy of flights with “newbies.” Perhaps, one day Rob will be driving past an airport and think to himself, “you know, I can do that. Why don’t I check out some lessons?” It would be awesome to see that happen one day.

Less than one week later, I found myself again flying a “newbie.” Hassan, another aspiring pilot, and I hung out for a couple of nights while I was in Hong Kong. He’d been out in China on business and our schedules matched up well to meet up for a couple of days in Hong Kong. He lives in the Bay Area and travels often for work. We met several months ago and chatted numerous time at parties. His wife (Mahreen) and Kaitlyn are fellow respiratory therapists at Kaiser. In most of our conversations, the discussion always seem to come back to flying. Though Hassan might be a quiet guy, he has an active spirit, which is slowly gravitating towards flying. We met at San Carlos airport on a perfect saturday morning for a quick flight around the bay. Yet before getting into the aircraft, I spent about an hour discussing aeronautical charts, pre-flight procedures, and practically any other random question that he through at me. At one time, I even joked that I felt like I was preparing for my oral exam all over again. Yet, I loved it. I loved being able to answer all his questions. With each answer, it seems his desire to want to fly grew more and more. So rather than the standard “inside the bay” tour that I do for most flights, I decided to take him on a scenic route throughout the Livermore Valley and up near Napa.

As pilots we sometime forget how much we’ve learned and how much we do on each flight. I’d forewarned Hassan that there would be a lot of radio chatter during the flight but that it would be normal. This is the first thing most non-pilots notice on their first flights, especially in the Bay Area. On a typical one hour flight around the Bay, I might end up talking to 10 or more controllers, and unlike airliners, the passengers hear everything. This actually adds to their level of understanding and intrigue, since it gives them a deeper appreciation for all that we must do as pilots to fly the plane and keep them safe. After we landed back at SQL, one of the first things Hassan said to me after the landing was, “Man, it’s really amazing how much you have to do. There’s so much stuff to focus on and you seemed to do it so easily.” He went on to say how he thought I’d make an extra flight instructor someday because he could see how much I loved aviation. It went showed in how I explained things to him. Needless to say, I thanked him graciously and thought about my dad. Every time I received any positive feedback about my abilities as a pilot and/or the fact that someone feels I should be a flight instructor, I make sure to pass along the feedback to my dad – my personal flight instructor. For it was he who passed the torch to me. I hope I get the chance to fly Hassan again, and once hope that one day I hear about him starting to take his own lessons. I wouldn’t be surprised.